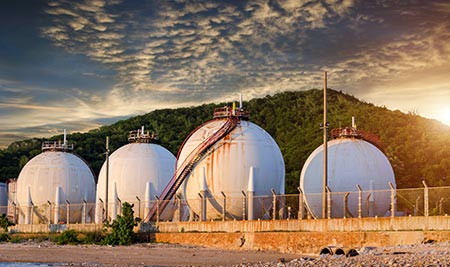 The basic idea of LPG is simple. If you’re far from a gas main (the ordinary system of natural gas supplied to buildings through a network of pipes), simply get your gas from a large fixed tank or a portable canister or bottle. As its name suggests, LPG is a fossil fuel closely linked to oil.

Chemically, LPG is a mixture of two flammable but nontoxic gases called propane and butane. Both of these are hydrocarbons (their molecules are made from different combinations of hydrogen and carbon atoms): propane molecules (C3H8) have eight hydrogen atoms attached to three carbon atoms, while butane molecules (C4H10) have ten hydrogen atoms bonded to four carbon atoms. LPG sometimes contains a variation of butane called isobutane, which has the same component atoms (four carbons and ten hydrogens) connected together in a slightly different way.

Exactly which of the gases is present in LPG depends on where it comes from, how it is supplied, and what it is being used for. LPG typically contains a mixture of butane and propane gases, and tiny quantities of other gases are also naturally present. Since LPG is normally odorless, small amounts of a pungent gas such as ethanethiol (also known as ethyl mercaptan) are added to help people smell potentially dangerous gas leaks, which might otherwise go undetected. Pure butane tends to be used more for small, portable LPG supplies in such things as boats and gas-powered barbecue stoves. Since butane doesn’t burn well at low temperatures, portable canisters often contain a blend of 20 percent propane and 80 percent butane; propane has a much lower boiling point so it’s less affected by freezing temperatures and generally better for year-round outdoor use in cold climates. Larger household tanks are more likely to contain a majority of propane (typically 90 percent propane in North America).

From liquid to gas… and back again

If you could see inside an LPG tank or bottle, you’d see a liquid not a gas. That’s because the propane and butane have been compressed so they take up something like 274 times less space than normal. Compressed in this way, LPG takes up relatively little space, so those big LPG tanks you see next to people’s homes actually contain far more “gas” (in liquid form) than you might suppose. In the same way, even a tiny canister of camping gas (slightly bigger than a jam jar) contains a surprising amount of energy for your cooking. When you use LPG, it’s released slowly and safely from the container through avalve and, at that point, turns back into a gas. In that form, it’s just like natural gas: it’s a fuel rich in energy that you can burn to release heat for cooking, heating, or powering something like a car engine.